One of my favourite night stalls would be luk-luk (steamboat).

It’s usually set up on a vehicle (motorcycle or truck) with a variety ranging from raw meat to vegetables on skewers to choose from. The price ranges from RM1 – RM4 per stick and the prices are marked on the skewers by colour code. The process is simple, grab a skewer, then dip it in to the boiling water until cooked. 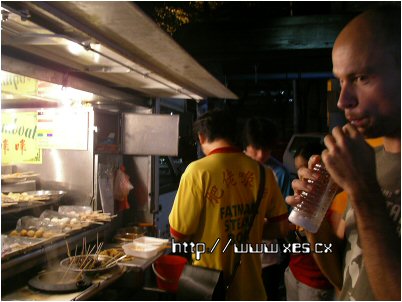 But recently, I’ve grown to love it, especially after few mugs of air kencing setan (beer). Also, I realised that most people do not redip their stuff back into the boiling water after taking a bite. So therefore, the likelihood of having my luk-luk boiled with saliva is pretty slim.

However, excessive lukluk and beer could lead to one thing.
This.. http://xes.cx/?p=1058