LONDON, June 16 (Reuters) – Female revellers at Britain’s outdoor Glastonbury Festival will be able to enjoy this year’s show without straining their bladders — courtesy of stand-up urinals.

Organisers have installed two sets of the urinals around the main Pyramid stage for the exclusive use of women, complete with “concierge” attendants to ensure a dignified experience.

Key to the arrangement is a special, anatomically shaped funnel to be handed out to each user.

“There are plenty of places the men can go and have a pee when they’re right in the middle of the festival and not near some of the proper toilets. These are the female equivalent of that,” said a spokesman for the festival.

The pink-coloured urinals, dubbed “She-pee” by the festival organisers, will be unveiled in a pink ribbon-cutting ceremony at midday on Wednesday, ahead of the three-day event at Pilton, in Somerset, southern England which starts on June 25.

The spokesman said the urinals had been used at other festivals, including in the Netherlands.

“They are well-tested,” he said. 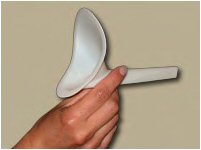 The Whiz
The Whiz is a funnel which allows a woman to go standing up – in the She-pee for instance.

How it works: It’s a reusable funnel which fits snugly against the body, meaning the woman can pee standing up, anywhere that a man could.

The Whiz is made from flexible anti-bacterial plastic meaning you can “pee, shake and stuff it in your pocket,” says Marketing Manager Kate Pierrepont.

“When we launched it at the Isle of Wight festival [2004] there were women rushing up to us who were desperate for the loo. This device makes it easier and more dignified than squatting because you can’t bear the queue.”

Pierrepont recommends using the Whiz in a urinal or toilet if possible, to prevent pollution of local water courses.