When Saddam Hussein fell from power, his statutes were removed, beheaded and whacked with slippers. His portraits were sprayed with bullets.
However, when Samy Vellu fell from power, his pictures are still seen all over Sg. Siput, a constituency that he has been holding for about 30 years. The Chairman of the Malaysia Indian Congress (MIC) recently lost his seat on the 8 March 2008 election. 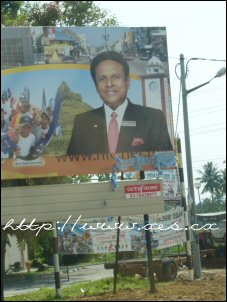 My colleagues and I travelled to Sg Siput for our fellow ex colleague, Gobi’s wedding. It was my first time there. I heard many rumours that Sg Siput roads are at top condition as Samy Vellu, who once held the post of Minister of Works, took good care of the roads. But when I was there, I find the roads so-so.
We arrived at one hall located next to a Chinese school. None of us in the car brought the invitation card hence our arrival to the Chinese school was purely on verbal directions.
Outside the hall lies a huge place card with the names “Gobinanthan and (something)” and a picture of the couple. None of us remember the name of Gobi’s wife.
Me: Gobi looks very different in the picture. He looks so fair. Never mind, let’s get down.
Colleague: Eh, no, no. I call K first.
We then realised that we entered the wrong wedding. Gobi’s full name is Gobinath. It would be embarrassing if we went in and gave out our angpows and thereafter reclaiming them back.
Despite the mix up, we arrived at the wedding hall just in time for the ceremony. Gobi was smartly dressed in his traditional suit. 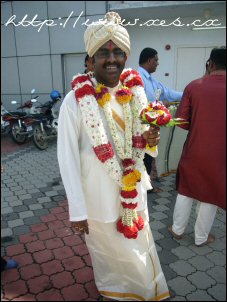 Soon, the procession started with loads of people running around and the sounds trumpet and drums played whole day long. Gobi, his wife and family members were all up on stage. It was a colourful ceremony. Ladies were all dressed in their best saris. 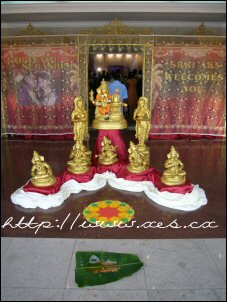 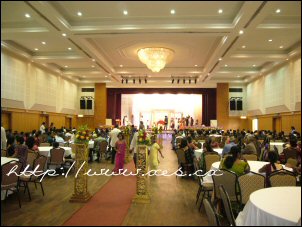 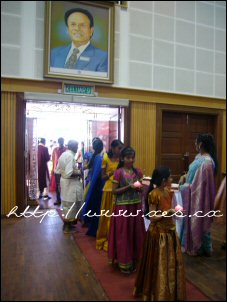 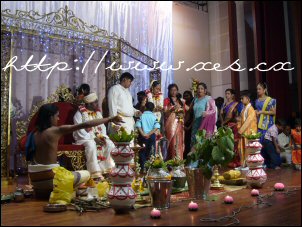 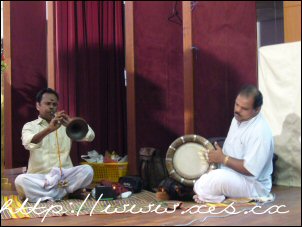 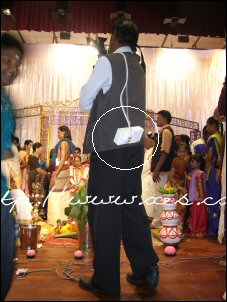 The camera man got a multi adapter hung to him HEHE
The highlight of the ceremony would be a ritual called Phere. In the Phere ritual, a part of the groom’s attire and the bride’s attire are tied together (symbolizing that they are now united) as they go around the ceremonial fire seven times. As soon as the Phere ritual is performed, the beat of the music picked up and it turned into a bloody rave party and everyone started shuffling. Out of no where, ivN stood next to me and said, “FENG AAHH!!!!!”.
Just kidding.
But I notice that once the Phere ritual is performed, everyone stood up and rushed towards the food. Food was only served after the ritual. The line went all the way to Timbuktu.
We missed the opportunity to throw rice at the newly wed couple. It would be great if I could blast some rice into Gobi’s face. HOU HAU!! SEK FANN!! (Open mouth! Eat Rice!!)
We went up to the stage to congratulate Gobi and pass him our angpows. I notice one Malay lady with a nice box of wrapped gift. The Chinese and Malay’s customs are quite similar. The Malays would give presents to the newly weds while the Chinese would give angpows to newly weds. 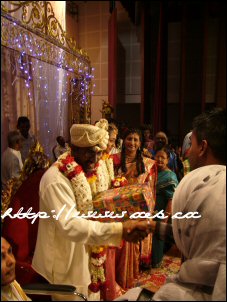 We didn’t stay long. We headed to Ipoh for lunch before heading home!

A car drove into a drain when we were on our way home.