When Ah Ming was a little boy in primary school, he was very cheeky. He was soooooo cheeky but his classmates adored him because he was quite a clever little boy. Sometimes, they did laugh at him because he was always scolded by the teachers.
One day in Bahasa Melayu (Malay language) class, the teacher asked the class,
“What is ‘exaggerate’ in Malay? Can anyone tell me?”
Ah Ming raised his hand.
“Teacher, teacher! I know!”
“The answer is, ‘Talk Cock’. TALK COCK IS EXAGGERATE!”
The class laughed and the teacher got annoyed.
“Wrong, Ah Ming! What sort of language is that! The answer is, ‘membesar-besarkan‘. That is ‘exaggerate’ in Malay.”
“But….. but….” Ah Ming protested.
“COME HERE!” the teacher gestured to Ah Ming and proceeded to rotan (cane) his backside.
“Now go and stand outside under the sun for the whole period!”
Ah Ming was so angry.
The next day, he approached the teacher and said, “TEACHER, YOU ARE WRONG! I WAS RIGHT!!!!!!” 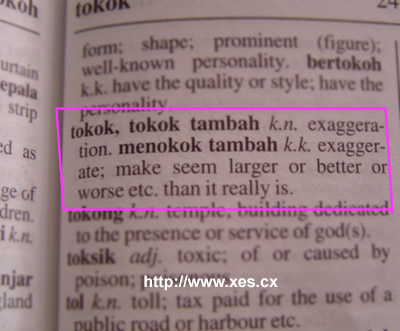