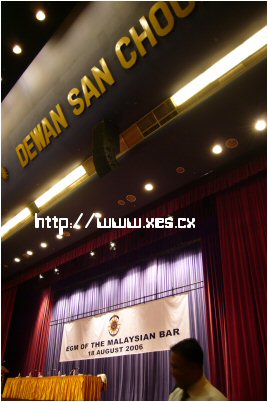 Due to the upcoming Legal Profession (Amendment) Bill 2006 which was drafted without the consultation of the members of the Malaysian Bar Council, Yang Mulia Raja Aziz Addruse and seconded by Datuk Param Cumaraswamy tabled a motion which called for the council to request the authorities to hold the amendments except for 2 and also set up an ad hoc committee to carry out dept studies on the amendments within 6 weeks and thereafter recommend to the relevant authorities.

The amendments by the Legal Profession Act 1976 (Amendment) Bill 2006 was heavily opposed by many lawyers and debates were going on (especially online) for weeks before Saturday’s EGM. For the past weeks, articles and comments were published and distributed among lawyers. Reading the Bill alone is quite confusing as one had to cross refer to the original Act. As such, I based my views on comments and articles posted on the net.

Due to articles and comments, I supported the motion simply because the members of the bar were not consulted over the said amendments and also that (innocent) partners of a partnership are liable for the wrong doings of their partners (note: there are other issues as well). The latter is obviously unfair. It’s like having a wife being chased by loan sharks after her husband defaulted on the loan.

I was told that the members of the Bar were not consulted simply because the process does not require the authorities to do so.
In order for the EGM to proceed, we needed at least a 2500 quorum. The issue of quorum has always been a concern to the members of the bar as without a full quorum, no EGM will be valid. I was told that lawyers all around Malaysia attended the EGM. Even the Penang Bar organised busses to KL!

At 2:20PM, the speaker announced that we have reached our quorum. The crowd exploded in a cheer. I was told that quorum was a record of 3265 lawyers!

The event was organised at Lee San Choon Hall in Wisma MCA with lawyers filling almost every seat. The EGM was chaired by our President. Every person was given an opportunity to speak by heading to one of the mikes around. 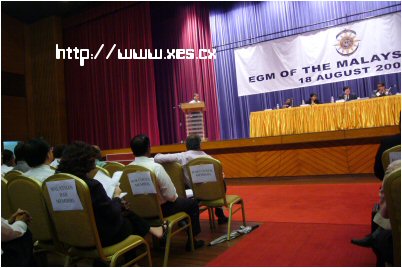 Journalists were around as well. However, they were asked to leave when the EGM was about to start.

Also, the last thing that I expected to happen in the EGM was a person coming up to me telling me that she reads my blog. Ms. Oblique, also a journalist for one of the newspapers in Malaysia, came up to me and to say hi. At that time, I was taking pictures of the place, which was obviously out of place. I was caught in an embarrassing situation.

There was no doubt that the majority of the crowd wanted to pass the motion. However, many lawyers stood to debate on the issues and sometimes diverting the issues. At one point, we had a senator standing up criticizing the current Bar Council committee and also supporting the governing party. 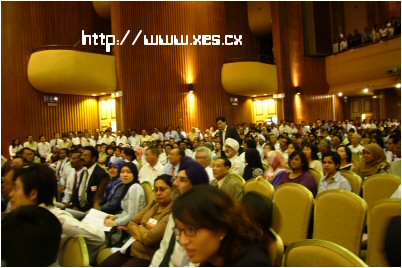 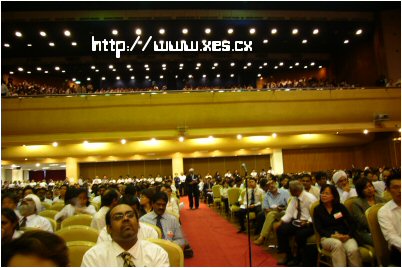 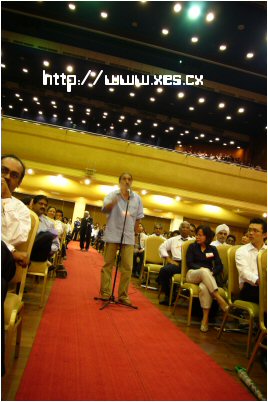 Moments later, Tuan Haji Sulaiman was interrupted by him.

From all these debates, I’ve learned that you will lose a person’s attention if you do not speak well. Any ‘umm..’ and ‘errs..’ will nevertheless lose the listener. Further, the tone of the voice plays a part as well. 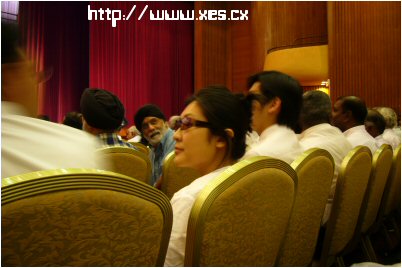 After a long debate, we finally decided to vote by raising our hands. The results were that the overwhelming majority supported the motion. And as the Chairman was about to proclaim that overwhelming majority supported the motion, a person suddenly stood up saying, “For clarification purposes, the words overwhelming majority is when one reaches 2/3 of the majority”. O_O||| Lawyers I tell you.
In the end, the Council decided to have a manual vote count. However, at one point, one fellow announced to the floor that his section (top section) has over 1400 votes. After a precise count by volunteer scrutineers, we were informed that the top section had only 500 over people. O_O|||| 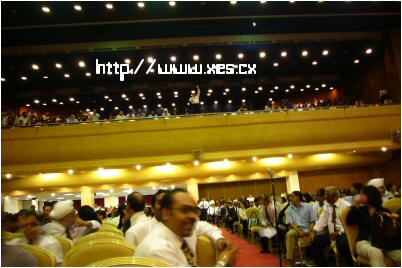 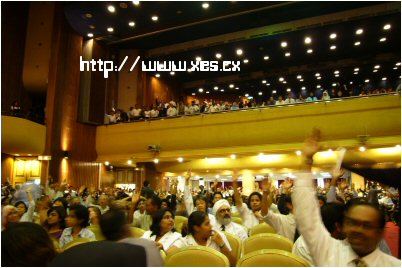 The EGM ended around 5PM. The motion was passed.

As people were about to leave, a lawyer announced that he wanted to put something into record. At that time, we were all eager to leave. The lawyer’s voice was drowned by the noise of chairs moving and people leaving.