My Malay colleague F invited me to his wedding @ Felda Chemomoi, at the state of Pahang. A Felda estate is a small village with basic amenities. It was established by the government to resettle the rural poor.
The journey to Felda Chemomoi was filled with uncertainty. The map that F printed on his invitation card doesn’t reflect the real route. The directions that he depicted on his map were quite straight forward. However, it wasn’t that straight forward, my car had to endure 1 ½ hour of windy trunk roads and hills. It was like driving into a jungle. By the end of the trip, I found my back tyres bald.
After a 3 hours journey (was expecting it to be 1 1/2 – 2 hours!), we reached Felda Chemomoi to find that F’s wedding was already over! But yet he invited us to his house and gave us some food.
We sat on the floor together with F’s wife and 2 of her village mates. We smiled at F’s wife and continued eating. We didn’t exchange any words.

F then came over to chat with me and thereafter his wife said, “Ehhh.. you guys are colleagues? I thoughts you guys got lost in this Felda estate and dropped by for a meal!”. The bride thought we were strangers who got lost and decided to drop by for a meal. O_O” 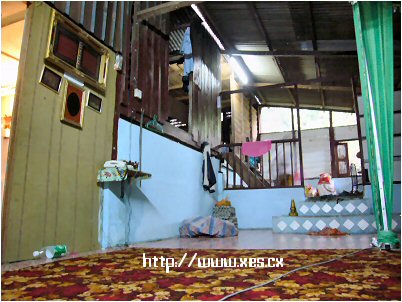 Inside
The food was great but there were too many flies around. I wonder how anyone could cope with all these flies around. I was so tempted to buy a can of pesticide and to kill all those little buggers.
Then I had to take a leak.
F: You nak toilet biasa atau luar biasa? (Do you want to go to an extraordinary toilet or ordinary toilet?)
Me: Err..toilet luar biasa tu Jamban?? Apa-apa la. (extraordinary toilet is a jamban? (a toilet which is placed outside the house) Anything la)
So he brought me to the kitchen, into a toilet with a tub filled with water and a washing machine on the other side. He then left me alone to do my business. I stood there in the toilet, with the door open, looking left and right for the most essential fixture. I thought to myself, “WHERE IS THE TOILET BOWL???”. Then I saw a hole right between my legs. A HOLE JUST RIGHT ENOUGH TO FIT AN ARM.
I had no idea what to do. Should I piss in to the hole?? But there are clothes lying next to the hole! What if I missed and peed on the clothes???
Then I decide not to do my business there left the ‘toilet’.
F greeted me as I walked out from the room.
F: Dah?? (Done??)
Me: YAYA! DONE!
F then showed me the gifts that his wife gave him. It was pretty interesting. There were various gifts inside transparent boxes including shoes, clothes, chocolate and even a jelly cake. He told me that during Muslim’s (or is it Malay?) wedding, the bride and groom exchange gifts. F gave his wife various gifts as well. I remember seeing shoes, towel and even fruits! 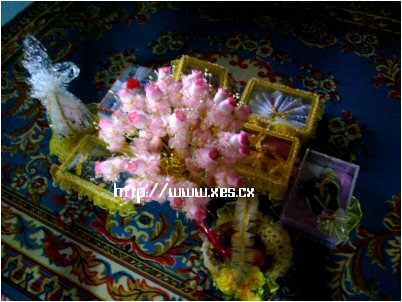 The gifts!
After bidding F and his family goodbye, I rushed to the toilet at a small Esso station. 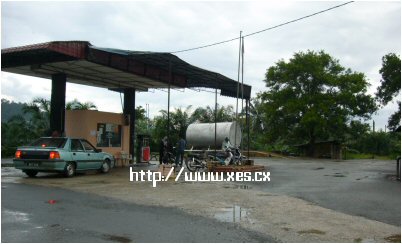 Only 2 pumps!
On the side of the petrol station, there was a small surau and another annex. The annex is a small room with a tap with running water. It has no basin, no decoration and no lights! All it has is the said tap and a small drain. Without hesitation, I did my business and then I realised something. Usually when Muslims pray in the surau, they would wash their hands and feet and usually this is done at a special area. And that place could be the PLACE where I am PEEING.
So there I was, peeing to a drain with thoughts of villagers barging into the room screaming “WOOOII!!! JANGAN KENCING!! (STOP PISSING!!)”. Fortunately, nobody no one barged into the room. And I am quite sure it’s a toilet!