Today is time for family to gather around and eat sticky dough balls in syrupy water together.

The ‘Winter Solstice Festival’ in Chinese roughly means that it is the day when sunlight is the shortest and daylight is the weakest. The dough balls are called ‘Tang yuan’ in Mandarin, or ‘Tong yuen’ in Cantonese.

‘Tang yuan’ are made of glutinuous rice flour and sometimes brightly coloured. They can be plain or stuffed with red bean paste, crushed peanuts, lotus paste or gula melaka. 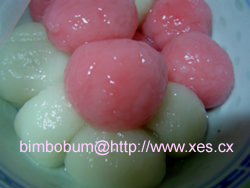 It is believed that eating tang yuen will rid bad luck – a belief which originated long time ago in China. The story went something like this:

Frank_omatic and Bimbobum were once eating at a stall in a little town in China. Frank_omatic is always gobbling his food, and he accidentally swallowed some fish bones which were in his Penang Assam Laksa. Choking, he tried drinking water but it didn’t work. Bimbobum whacked him the back but it didn’t dislodge the fish bones.
At the same time, a beggar (actually, he’s xes) came and asked for food.

Seeing that Frank_omatic was turning blue, xes offered him lumps of dough and ask him to swallow. (Frank_omatic actually wanted to throw them away, but Bimbobum was a wise one, and asked him to just swallow them.) Frank_omatic swallowed them, and it worked, the fish bones were dislodged!

So, everyone lived happily ever after.

Hope you guys had your tang yuan already!
reference: wikipedia