The Star Newspaper finally published the story about the Smirnoff Two New Flavours One Launch Party @ Sanctuary, The Curve Shopping Centre which I attended with fellow blogges Shaolin Tiger, Suanie and Kimfluttersby. Many thanks to ThaiBoxingGirl, Kimberlycun & Mypartners for the publicity.

From The Star Newspaper

MALAYSIAN nightlife just got more exciting with the launch of the two new Smirnoff flavoured vodkas at the Sanctuary, The Curve last month.

The new flavours – Green Apple and Vanilla – were introduced during an exclusive party for Smirnoff enthusiasts.

“Smirnoff’s new lines of flavoured vodkas are highly versatile when it comes to mixing, and they are easy on the palates hence making it fun to drink,” said DIAGEO Brands Manager Shirley Chan.

An exclusive treat: (From left) Chan with the bloggers, Foong, Kim Ong, Suanie and Gareth.

“This distinctive characteristic will resonate most with young achievers who are adventurous and fun individuals, always on the lookout for new and original offerings.”

The signature cocktails concocted from the new flavours were Apple Breeze Martini, Pineapple Apple Dava, Vanilla Cola and Twisted Cream.
The crowd gave their thumbs up for the new flavours when the drinks were . Four bloggers that helped spread the word of the new flavours prior to the launch were also treated to an exclusive tasting session of yet to be released Smirnoff flavoured vodkas in the ice-room.
The chill in the room, at -15 degree Celsius, could not dissuade the bloggers from gamely posing for photos with the drinks. 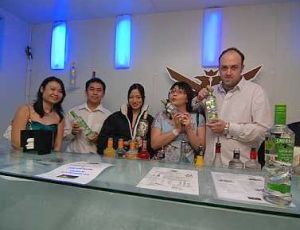 Vodka enthusiasts can look forward to the addition of all Smirnoff vodkas on the shelves of Duty Free Stores, major hypermarkets and night entertainment venues such as, Sanctuary, Zouk and The Loft (Asian Heritage Row). The retail price is RM145 for each 70cl bottle.

8 thoughts on “www.xes.cx in the newspaper!”