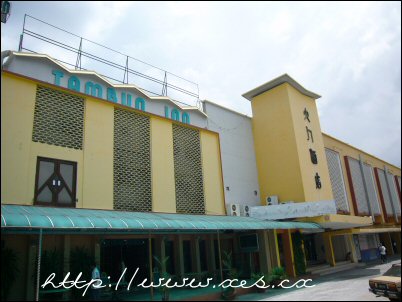 We stayed at one hotel by the name Tambun Inn. From outside, the place looks run down and creepy. Oh, the inn is next to a Chinese cemetery! 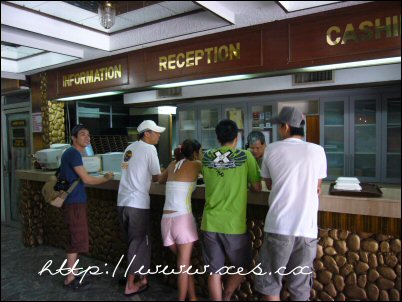 But inside, the place looks fine. It seems that their interior has been revamped. Our room was not comfortable though. 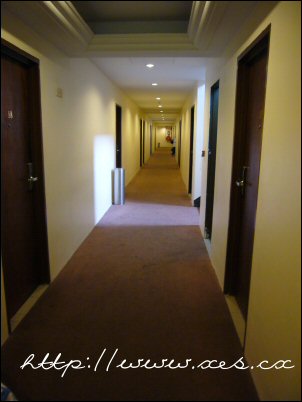 Other than a hotel, the place is also a night spot – a fengtau (shake head) joint to be precise. 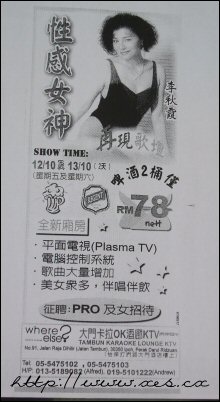 This inn is reported to be haunted. My research on the internet reveals that lights turns on and off within the inn, as well as the odd sound of whispers.

I had one extraordinary encounter while sleeping. It was around 2 a.m. and my room lights were turned off. Suddenly, I heard a woman breathing loudly. It went on for some time.

Few moments later, I could hear a man breathing loudly. And thereafter, the woman’s voice again.

I then realised it was my neighbour having s*x in the middle of the night. The walls are so thin that I could hear them having hot s*x.

In conjunction with the Hari Raya public Holidays, my climbing gang (Amos, Angeline, Carnes Bangxin, Fai, Mikey and Ping) and I made a trip down to Lost World of Tambun to check out their rock climbing facility. It’s around 2 hours from Kuala Lumpur.

We were fortunate to miss the balik kampung rush. The drive was pretty smooth.

The climbing spot, which is located at the back of the entertainment park, is located within a valley of lime stones with lakes scattered here and there. We were also fortunate to be spared from the scotching sun as the place is shaded by the natural rocks.

Carness with our crash pad.

END_OF_DOCUMENT_TOKEN_TO_BE_REPLACED 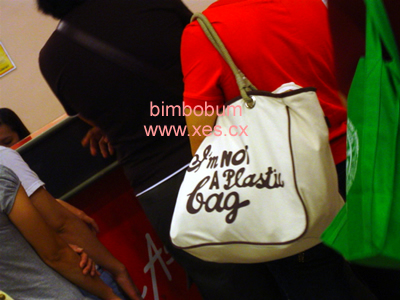 Anya Hindmarch, the designer who came up with this must-have tote bag are sold out in the United States. A few months ago, you must have read that the queues in Taiwan or Singapore (I can’t remember which country) were crazy mad, women were trampling on others just to get the bags!!
Of course, I do wonder whether I sighted the original or a fake. Hmmm….
Ooooohhhh check out the Bag Snob!

Back from Ipoh!
My climbing gang and I made a trip down to the Lost World of Tambum at Ipoh check our their outdoor rock climbing spot. Excellent place. However, we only managed to climb 2 routes and ended up eating the whole trip. Our climbing trip has turned into an eating trip. There goes all my workout.
I’ll fill in the details tomorrow.
To our Muslim readers. Selamat Hari Raya, Maaf Zahir dan Batin! 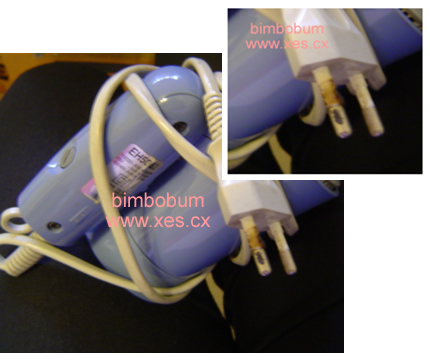 Burnt my hairdryer this morning.
Thought I burnt my hair, but luckily I didn’t.
Don’t have time to buy a new one.
Can I still use it?
Hmmm……..
Dare not, though! ;P 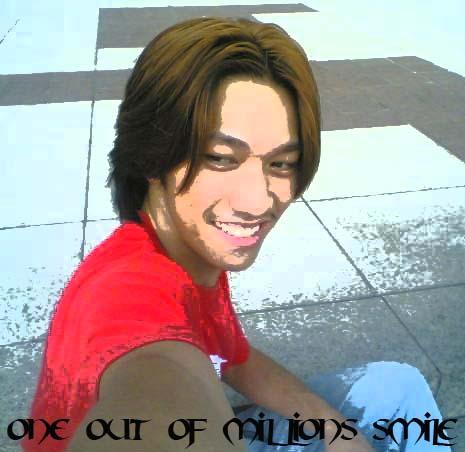 Now that Hari Raya is around the corner, I am troubled as to whether I should treat some of my Muslim staff and colleagues with some titbits or little gifts. Last year, I gave them chocolates and sweets. This year, I’m thinking if I should stop the practice.
My bosses do not treat their staff with festive hampers or meals. They believe that the line between superiors and subordinates should not be crossed. But growing up with parents who have always been thoughtful with their staff, I find it difficult to ignore the thought of giving simple treats during the festive season.
My bosses do not buy souvenirs for the staff (including me) when they travel overseas. Not even a box of chocolate to be shared. We used to grumble that they are extremely stingy and selfish – why is it they can afford a trip overseas but cannot afford (or refuse to) treat us with simple gifts?
Ask xes, and he’ll tell you that he doesn’t believe in buying souvenirs and treats for his support staff. ;P (OK, I remember this 2 years ago. Have you decided otherwise?) He thought I was mad to worry about what to get for my staff back then.
I don’t know about you, but do you consider it a big deal when you treat some of your clerical staff to a simple meal? Buy chocolates when you return from a trip overseas? I couldn’t bear not buying anything for my secretary when I went away for the holiday, or even my colleagues who relieved me during my holiday. Simple treats are just a way of saying thanks!
Anyway, I’ve decided to give some of my staff some Famous Amos cookies, which aren’t that cheap, when you think about it. I’m so tempted to have them all to myself!

You know when your work sucks..

If you are suddenly called up for a meeting which the details of it you had no knowledge at 12:30PM;

The meeting lasted until 2AM;

You had to walk under the rain back to the office at 2AM;

You have to come out with something by tomorrow morning; and

You are blogging about this at 230AM. 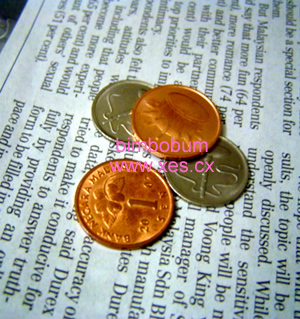 Bought some stuff today at a store and it cost me RM23.91. Gave the cashier RM25 and when my change was given back to me, it was only RM1.05.
Hmmm.
I was too tired to make a big fuss, and i’ve never made a big fuss over the 1 sen coins before. Some people do insist, because they say it’s a matter of principle. Most of my friends do, whereas some won’t bother.
Some shops are generous enough to give you 10 sen change instead of short-changing you. And I like that. 😉

Well, well, my birthday marathon has finally come to an end. Thank you to all who organised it. Based on previous experience, it’s best to celebrate my birthday with different group of friends on different days. This would enable me to mingle around easier and catch up with friends that I’ve not seen for quite some time.

I’ve never eaten so many cakes in a week in my life before. 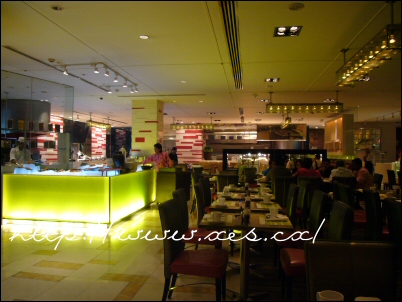 Since I signed up for the Prestige Platinum membership at Shangri-la , I decided to have dinner with A at Lemon Garden. Few years back, I celebrate ivN and Sam’s birthday there. The place was excellent and the food was good.
However, this time round, the restaurant had turned into a playground. Kids were running and jumping around. I even had one kid crawling under my chair.

The food wasn’t excellent as well. The variety had lessened and their raw food such as sashimi and oyster are no longer fresh. Service doesn’t come with a smile too. How disappointing.

The good thing about Prestige Platinum membership is that by signing up as a member, I am entitled to a free cake (strawberry tiramisu!), 2 complimentary glasses of house wine (which I didn’t finish) and a bottle of wine. Further, I am entitled to 50% discount off my bill! 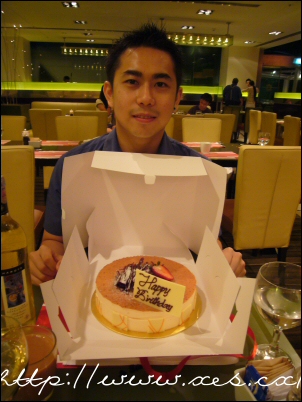 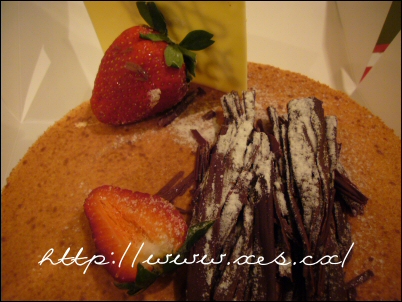 3rd Bday
My birthday celebration with my colleagues was rather low key. In fact, very low key. It was just 4 of my colleagues! The rest were either rushing for something, on leave or going out station.

But we celebrate it at the place that I’ve always wanted – McDonalds, without Ronald McDonalds… and A&W Bear.. and Colonel Sanders beating the shit out of each other. 🙁

My high school mates gathered at our old place Happy Cafe, a small alfresco cafe which serves beer at RM24 per jug. It was also a joint birthday drink up with yMing and Kiang whose birthdays fall within the same month. We started off mildly with few glasses of beer and fueled it with chips and peanuts. 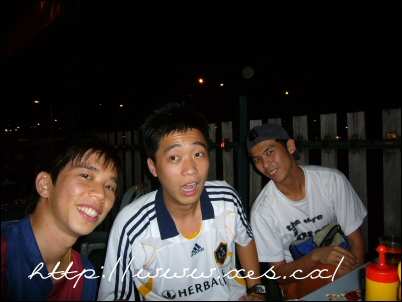 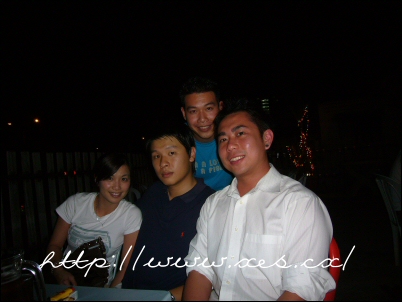 We slugged it out with 7 jugs of beer leaving me puking in the toilet while brushing my teeth in the shower. I had peanuts coming out from my nose.

6th Bday
This birthday was a little bit more civilized save for the cake cutting session. As usual, I had to pull out a piece of candle, which is planted deep into the cake, out from the cake – using my teeth. I had cake all over my bootiful face.
We had dinner at this place called Cipolla @ Jalan Telawi 2 which serves, among others, Italian food. Excellent interior and service. Plain water is free of charge unlike Izzi restaurant @ Uptown Damansara.

Our dinner was initially booked at one posh Indian restaurant but we changed after I said, “Pay so much for mamak food ah??”. Other suggestions like Tai Thong Chinese restaurant and Bah Kut Teh were shot down.

I think this is the 7th year my Sheffield mates celebrated my birthday. How touching. Heh. But they’ve gone so used to it until they write their wishes on birthday card in front of me, had my birthday cake – still in a box – shown to me and being passed on to a waiter telling them to refrigerate it and the costs of the birthday cake being revealed to me etc. 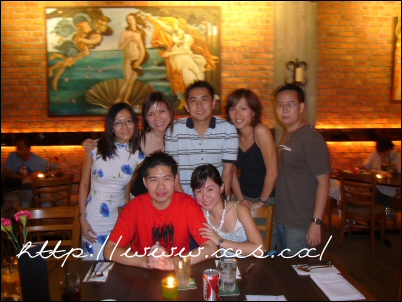 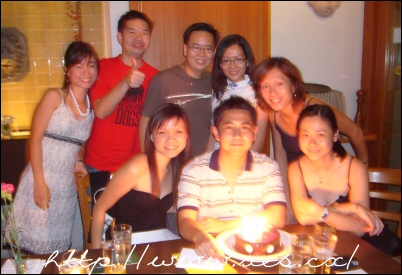 Thank you all for the wishes and company!