If your wife caught you cheating on her 6 times and she leaves you for it, what will you do to win her back? Will you,
(1) Kneel down in front of a shopping centre and get a spot in the local dailies so that she sees what you have done;
(2) Set up a blog telling how sorry you are;
(3) Go on national radio telling her that you are sorry and you want her back.
Malaysian Kelvin Ng had tried all the above and at print time has yet to be able to win her wife back.


Monday March 9, 2009
Desperate hubby pleading for wife to come home
By KNG ZHENG GUAN
PETALING JAYA: In a desperate attempt to win back his estranged wife, a man has continued to plead for her forgiveness in public.
Salesman Kelvin Ng, 29, made his first public attempt a week ago in SS2 here. On Saturday, the distressed husband tried again, kneeling down in front of Amcorp Mall with banners and a poster saying “I Love You Lee Sook Chin”. 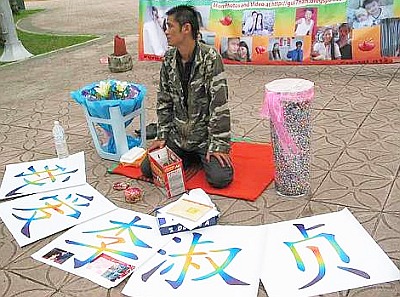 Speaking to reporters as he knelt, Ng swore that if his wife returned to him, he would repent.
“I want her to be the most admired woman out there and I want her to think that this marriage was never a wrong choice.
“I am doing my best to rescue this marriage and the whole world will be my witness,” he said.
Ng said his wife had claimed that he had been caught cheating on her six times.
However, he said he only cheated on her thrice and vowed not to be “playful” anymore.
Two weeks ago, his wife left him, leaving behind their two children – a boy, aged three and a girl, aged one.
One of his friends, Alex Tang, 30, said they were also there to do all they could to help Ng, who had been depressed.
Ng, who had earlier pledged to kneel for a whole day or until he passed out, remained in his position outside the mall until 10pm.
However, it was in vain because his wife did not come back.
When contacted, his wife Crystal Lee, 24, asked to be left alone.
“I will forgive my husband anyway but I need time to think it over,” she said.
Source: The Star

This morning, Kelvin Ng was interviewed by Fly FM and pleaded his wife to come home. Listeners were invited to give their comments and my god, ladies can be quite cynical at some times.
He gave out his blog url which I immediately surfed. Initially he had pictures of his wife and children posted on the blog but it was taken down later at night. There was also a poll which stated “Do you think my wife is pretty?”. The choices were “Pretty, Good, Bad and Worst”. LOL. It was taken down later at night as well. Damn! I haven’t vote yet!
Nevertheless, check out the video that was posted on his blog.

Can anyone Forgive and Forget?