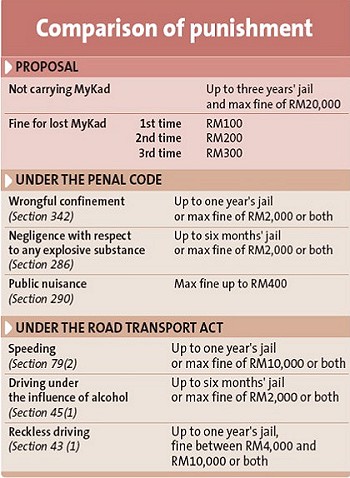 The latest hoohaa on our Malaysian law is the MyKad (Identity Card) law. Under the National Registration Regulations 1990, a person who has been issued an identity card must at all times carry on his person the identity card or otherwise face imprisonment for a term not exceeding three years or to a minimum fine of RM3000 and a maximum fine of RM20,000. Unknown to many people, this law has been around for ages.
Forgetting your MyKad is a very serious offence. During my short stint as a volunteer at the Criminal Magistrate Court, I had to mitigate for a young (18 years old) boy who forgot to bring his identity card. He was arrested after he failed to produce his identity card.
Despite my plea to the court to release the boy on a good behavior bond without sureties and without recorded conviction due to the triviality of the matter and also because he is a young first offender, the Learned Magistrate imprisoned the boy for 2 months. This is not the only incident. There were many other cases as well.
There are other trivial things we see everyday that amount to an offence. For example under Minor Offences Act:-
S27. Beggars
(c) every person begging in a public place, or in a place to which the public are admitted without payment or on payment, or using in any such place conduct calculated to induce the giving of alms (whether or not there is any pretence of singing, playing, performing, offering anything for sale or otherwise), and having or able to have other
lawful means of livelihood;
shall be deemed to be an idle and disorderly person and shall be liable to a fine not exceeding one hundred ringgit or to imprisonment for a term not exceeding one month or to both.
25A. Wearing, possessing or manufacturing of camouflage uniform.
(1) Any person, not being a member of the armed forces of Malaysia or of a visiting force, who wears any camouflage uniform or any part thereof or anything resembling a camouflage uniform or has in his
possession, custody or control any camouflage cloth or camouflage uniform or any part thereof or anything resembling any camouflage cloth shall be guilty of an offence and shall be liable on conviction
to a fine not exceeding five hundred ringgit or to imprisonment for a term not exceeding six months or to both.
6. Dog running at persons, etc.
If it is proved to the satisfaction of a magistrate that any dog is in the habit of running at persons or at vehicles, horses, cattle, sheep, goats or pigs passing along a public road, the owner of such dog shall be liable to a fine not exceeding one hundred ringgit.
Let me know if you can’t understand the sections that I posted 😛