today’s Star newspaper talked about amber chia being featured in the first issue of Indonesia Playboy which sparked comments from everywhere. the magazine, i mean, not amber chia.
a few organisations in Indonesia who fear for the corruption of the morality in the country have vowed to make sure that the magazine will be rid from news-stands, and i wonder how will they do it? they say that ‘moral terrorism’ is more dangerous towards Indonesia than terrorism itself. ;P
hugh hefner, the founder of Playboy magazine, just celebrated his 80th birthday, and is living with 3 girlfriends. i wonder what his girlfriends do everyday….
Who’s Your Daddy? isn’t real, right? or is it? the lifestyle, i mean. ;P woo….
anyway, what does it take to be in the centerfold? i want to be in one!!!!!! but the closest i’ve been in one is in an exercise book back in high school ……………. my fat bum was made fun of.
and speaking of morality! i’m not happy with this. that holding hands and kissing in public shit.
[Added by xes]
The news that bimbobum wasn’t happy about is the recent Federal Court decision:-

PUTRAJAYA: The local government has the power to establish by-laws to prosecute citizens who behave disorderly in public, the Federal Court ruled yesterday.
Chief Justice Tun Ahmad Fairuz Sheikh Abdul Halim, together with Federal Court judges Datuk Alauddin Sheriff and Datuk Richard Malanjum, unanimously held that the Datuk Bandar of Kuala Lumpur (DBKL) was correct to charge two students for behaving indecently by hugging and kissing at Kuala Lumpur City Centre Park.
The court ruled that Section 8 (1) of the Park By-Laws, the section invoked by the Datuk Bandar to punish persons caught behaving indecently in public was constitutional.
Following the ruling, two students, Ooi Kean Thong, 24, and Siow Ai Wei, 22, will have to defend themselves against the charge levelled against them at the Kuala Lumpur City Hall Court.

In view of the aforesaid Federal Court decision, a lawyer in the Malaysian Bar Council Forum suggested the following:

I urge the Bar Council to organise a day trip to KLCC garden and gather as many lawyers as possible to hold a mass-kissing between lawyers to show our protest to the recent case. Single male lawyers will kiss singles female lawyers while those married will kiss their own spouses. We want to show to the government that kissing in public is NOT and will NEVER be wrong. We mean business. Morality issues should never be confused with law.
This way, we can achieve 2 goals in a day… First, we can clearly tell the govt what is our stand on the issue. And secondly, we can create a stronger bond between members of the Bar.

Source: http://www.malaysianbar.org.my/component/option,com_simpleboard/Itemid,215/func,view/id,650/catid,7/
LOL! Stronger bond by kissing each other? 😀

2 weeks back, while on my way back to my car from a shopping centre near my house (Parkson OUG), I was approached by a dark Chinese guy.

He handed me a sealed letter.

According to him, the sealed letter is some sort of lucky draw. If I get some sort of voucher, then I’ll be entitled to a 50% discount on some branded electronic items suchs as Philips and Ogawa. He showed me a sample voucher. It was badly designed though.

Me: err.. dude, I don’t want it.. sorry to waste your time man.
Guy: it’s okay it’s okay! You can have the envelope! It’s for you! I’ve given it to some other people around this car park too! If you find this voucher in the envelope, then you’ll be entitled to the discount!
I then tore open the envelope and found a voucher which is identical to the sample that the guy showed me. I gave it to him. He looked at it with his eyes widely opened. And screamed..

The guy then runs off. I thought to myself, “Cheebye, why am I taking all this bullshit. It’s a bloody scam man”. I immediately made a 3 point turn and tried to escape. Unfortunately, the guy came back before I could speed off. 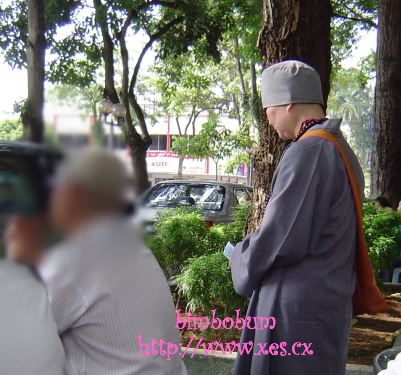 it’s been said that monks cannot beg, unless it is for food, and before noon. it has been long brought to the attention of the government of these vagrant monks and the public has been advised not to make any donation to them. “donate to the real monks in temples”, is the general advice.
i was having my breakfast in one of the coffee shops in PJ State when this lady “monk” came along. my friend quietly made a donation, and i noticed that there were not many donors from other tables.
honestly, i can’t stand it when they hover at your elbow, when you’re trying to eat in peace. it’s just plain annoying, and i’d feel better making donations straight at the temple. most of the time they’re fake and taking advantage of everyone’s generosity! most of them are not locals, too …
read this.
in general, some beggars’ determination is so strong that they should be put to better use, e.g., doing charity work (genuine!) or part time jobs, perhaps. i don’t mean to be cruel, but if you can hobble around, or walk with your eyes partially closed, or just stand in one spot from morning til night, with your hands outstretched, surely it can be put to use? dammit, i’m referring to capable ones, ok. 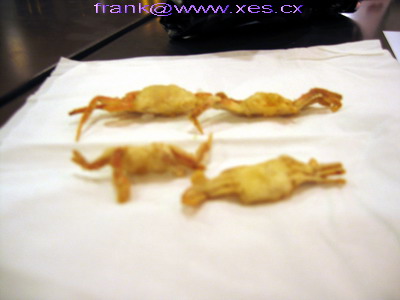 I had to attend Penang Court on Wednesday hence I made a trip to Penang the night before.

Forget the temples and beaches, Penang’s all about food. I purposely made arrangements to have an early flight so that I can have dinner at Penang.

Fon picked me up from the airport. He then brought me to a place called Kimberly Street, somewhere near Komtar. It has great fried kuew teow and ling chee kang. Fon bought some ham chim peng back as well. The ham chim peng was pretty unique as it’s bigger than the ones we have in KL. And by selling ham chim peng at Penang, you might be able to afford a Toyota Altis. I don’t want to be lawyer already la. 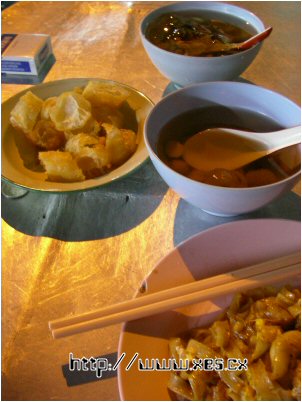 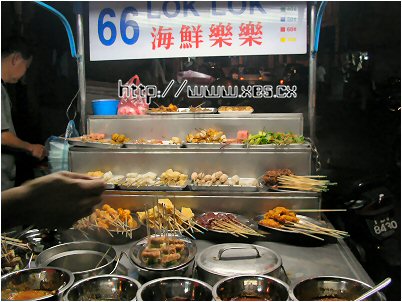 Thereafter, we tried Luk-Luk. Their luk-luk stall isn’t as impressive as those we have in KL and the one doesn’t I had doesn’t have many choices. However, instead of the usual satay and dark sweet sauce, they had many types of sauces, even curry sauce!
After dinner, Fon brought me around Penang City. It’s nice to see how lively Penang street is during the night. In KL city, the streets are usually dead and most of the people are congregating inside shopping centres. 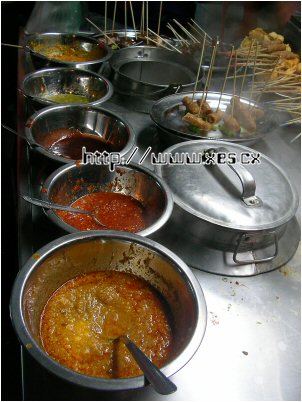 I bid Fon farewell after he dropped me at my hotel. Thanks d00d!

I was given a nice studio hotel at Hotel Gurney. It comes with a bathtub with Jacuzzi, 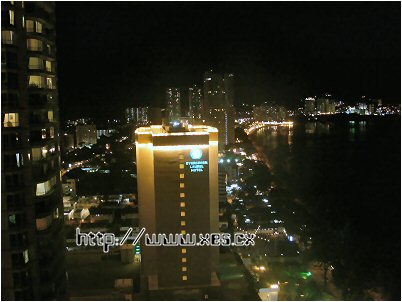 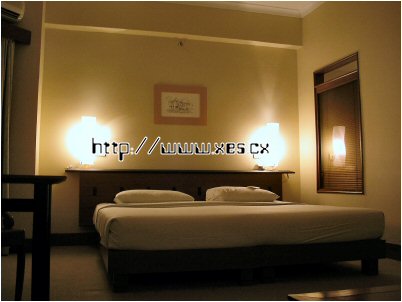 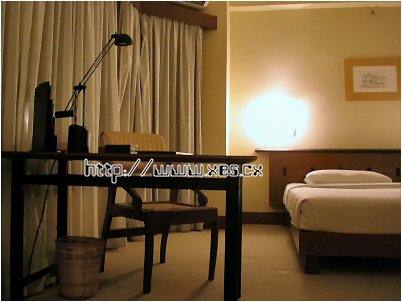 nice sofa with cable tv and loads of space. Oh not to mention 2 bloody air cons. My room sort of turned into an ice box at night.
However, despite all those luxuries, it made me realise something.
Even if I have all the money in the world, living in the penthouse of one of the tallest apartments in New York, sipping champagne celebrating my billion dollar contract, it sure feels lonely without anyone sharing it with you. 🙂

well, we have somehow managed to conclude that guys should pay for the first date and girls should offer to pay their share (just make the gesture); and if there is a subsequent date, the girls should buy coffee or dessert.
what comes next? some of the things i have been ‘taught’ or advised are as follows:
(i) if he follows up with a text message or a phone call right after your date, he’s interested.
(ii) if he calls again within the week after your date, he’s interested.
(he calls to chat, not to ask you out)
(iii) if he calls within the week, mid-week to be exact, to ask you out for a date on friday or saturday – BEWARE!
why? WHY??
apparently, it could be because:
(a) he has no other friends – a sad case to be asking you out during the weekend;
(b) he’s a player, just stringing you along;
(c) ok, so he’s pretty interested, but isn’t it too soon, too fast?
funny, right? even i’m confused. how do we actually verify situation (b) or (c) if we don’t even go on a few more dates? oh, and if it’s (c), girls should say no, perhaps another time – tell it to him gently. you’re not rejecting him totally, if you’re interested. but you must get on with your own life, do your own things with your friends during the weekend.
and then i was advised that girls should never call the guys out for the second date. NEVER. according to rule #30 of the Official Dating Guide Book*. that is within the week after the first date, i mean.
why? because then the girl is showing signs of being INTERESTED. girls must let the guys do a bit of chasing, before showing a bit of interest. if not, the guy gets big-headed about it. and may lose interest quickly. (but after two weeks and he still hasn’t called, then yes, you may call him just to have a quick chat, THAT’s ALL – need to find out if the guy is still interested or not. ;P)
it’s a headache, i tell you. i never knew dating could be this complicated.
out of boredom, i actually clicked on “DATING TIPS” on friendster.com the other day. ;P i only read ONE article, because …. it felt really silly to be reading tips like that when it’s all common sense. hehe. however, that article advised girls not to show too many positive signals as the guys may immediately panic, suffocate and drop dead.
apparently they can’t take it, because they freak out easily, too – thinking that girls have already labelled them a couple, planning weekends and their future, screaming “I WANT TO HAVE YOUR BABIES!!!” to the whole entire world.
the irony of it – if you don’t flash any positive signals, they’ll think you’re not interested or you’re a playgirl – using and abusing them (i.e. too many guys to choose from, too). if you show any, you’re clingy, possessive, etc.
arranged marriages are hassle-free, i guess.
* i don’t know if this exists. Dating for Dummies, got la. ;P

Recently i read about a security company that sent out real life size cardboard security guard greeting card. According to them, their clients/friends love it and put it in front of their main door when they “balik kampung” (return to hometown) . Apparently, the “security guard” could repel theives too because he look kinda “ganas” (fierce/violence).
But to me, i prefer to put this…

This time round, there were only 10 contestants left from the 17 contestants in the Semi Finals. Gurmit, Johnson and I judged this competition again.

We had the opportunity to be introduced to Freddy, the boss of Station 3. He treated us with some drinks though not as much as last week. Last week was crazy, the manager fed us with too much beer.
Since Swedish Daniel Norstom wanted to check out the scene in Melaka, we brought him along. I hope he had a great time there 😀

END_OF_DOCUMENT_TOKEN_TO_BE_REPLACED

shop: Restoran Sri Gangka, on the same row as SOD (Source of Delight) and HK Express in SS2. 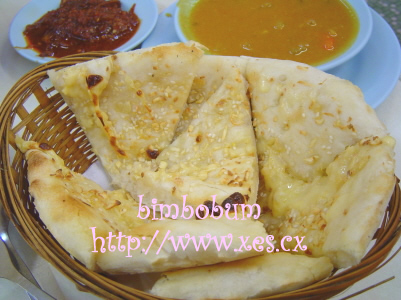 the garlic cheese naan. with sesame seeds on top, so cute. garlicky and cheesy taste is not that strong. and served in a basket. so cute!! ;P