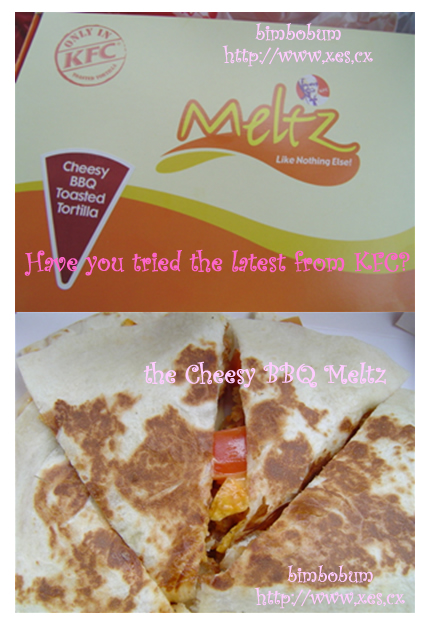 Cheesy BBQ Meltz is toasted tortilla bread filled with melted Mozzarella cheese, crushed BBQ nacho chips, tomatoes and mayonnaise. One of the reasons why I tried it was not because of the advertisement (“eh, why did you switch of the lights, sir?”) but because I was desperately hungry and the only convenient place to stop was KFC’s Drive Thru, and I didn’t know what to eat.

Looking at it, it reminded me of roti canai. roti canai also thicker and cheaper la! 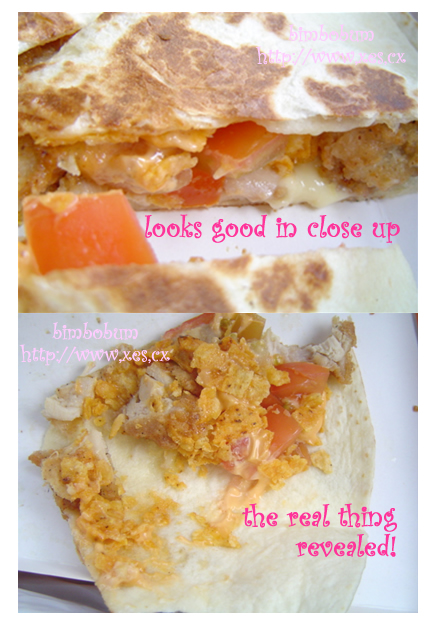 It’s just another version of the Bandito Pockett which was introduced a few years back. Except that the chicken was diced (nope, for a moment I thought it was KFC Popcorn Chicken).

I would say that it’s just OK, and not recommended if:

(1) you’re used to eating the 3-piece meal set because this is for small tummies only; and
(2) if you’re on your first or second date and you’re still shy around the potential candidate because it’s really messy. I felt like a slob when all the nacho chips kept falling out. doesn’t make eating graceful.

IT NEEDS MORE MAYO, CHEESE AND SOME GREENS, KFC! you listening? reading, i mean. ;P

(1) KFC Holdings’s budget for promotion and advertising of this product is RM4 million.
(2) Malaysia is the first country outside US to have launched this product. ooooh… malaysia boleh?
Promotional period is for 2 months only – ending around early September.

So go and try. (But i think the Zinger burger is more worth it. ;P)
Another review here.