END_OF_DOCUMENT_TOKEN_TO_BE_REPLACED

The Prime Minister’s wife Datin Seri Endon Mahmood died at 7.55 am today at the Prime Minister’s official residence in Putrajaya after fighting a long battle with cancer. Endon, 64, breathed her last about 18 days after returning from treatment for breast cancer in Los Angeles, United States. Read more about it here.

I heard this breaking news from my colleague when i came into the office. My first reaction was “Shit! Will there be any impact on the economy?.” After a few sip of coffee…”Ah, no la.”

The PA came in angry.

“WTF!!! How come the radio play Dumb Ass music? MY FM (Local Chinese Radio Station) was braodcasting an interview with Andy Lau (A Famous HK star)!! tiu nia sing (Fuck) i am going to call MY FM to ask!”

She then went on to dial MY FM’s number franticly. After 10 mins, finally she got through…

She then came over my place,smiling,

“I just spoke to the DJ. Damn! his voice was sexy.”

Later in the Afternoon, a lot of people was speculating that Friday will be declared a public holiday. Then rumours started to spread that Monday will be declared public holiday instead because Selangor is having public holiday on Friday. Suddenly, eveyone over the nation is in holiday mood. I called a lawyer in KL asking whether or not that lawyer can mention (a court process where your file will be called up in court to make sure that all cause papers are in order.

Then, the court will fix a hearing date. In my view, this process is the mother to the problem of court backlog.) on behalf of my firm for a case on Monday.

Lawyer: ah, no la. Monday case not going on la because it’s public holiday.
me: How sure are you?
Lawyer: My clerk said so.
me: I call the court, they say it’s going on.
Lawyer: Aiya, the court clerk always say case is going on la.
me: but what happen if it goes on and no one is there?
Lawyer: I guarantee you that Monday is a holiday.

Lucky, my senior agrees to run two courts on Monday.

Anyway, www.xes.cx would like to send our deepest condolence t o Pak Lah and his family. May the soul of Datin Seri Endon Mahmood rest in peace.

Located about an hour away from Tokyo. It was the ancient capital of Japan during the Kamakura shogunate

Jane said loads of retirees choose Kamakura to spend their retirement there.

Our first destination was Daibutsu (Great Buddha). It’s a huge Buddle statue. It was housed in a temple but the temple was washed away by tsunami in 1498 leaving the Buddha statue intact. The Buddha is hollow, you can go inside the statue with a price of 20 yen. Nothing interesting though.

We took some pictures, bought some souvenirs and left the place immediately.

END_OF_DOCUMENT_TOKEN_TO_BE_REPLACED

There seems to be many types of Kit Kat in Japan.
While searching for Green Tea Kit Kat as sourvenirs for those back home, I stumbled upon:-
Kit Kat Petit

Unfortunately, taste like any ordinary Kit Kat
But the size is a good way to control excessive consumption and to avoid the ‘i-feel-fat’ feeling.
then today, at at Shinagawa train station, I witnessed the launching of ..

END_OF_DOCUMENT_TOKEN_TO_BE_REPLACED

I always want to take pic of the sunset on the highway. Now, i can do it with SE K750i 2.0 Megapixel Camera phone. =P

I find it amazing to spend the morning in Kuala Lumpur and then the rest of the night in Tokyo.

So here I am, in Oomori, 9 hours from my departure from Kuala Lumpur. As usual, it was a hassle, had to carry many things. I made a mistake by bringing my jackets along. The weather here isn’t cold at all.

One of the most difficult things to cope here is taking a train. Although Japan is famous for its extensive and convenient train services, I usually spent 10 minutes staring at the map, trying to look for the station that I want to go. Then another thing is the bloody phone booths. It’s all in Japanese. Even the bloody lady who tells you, “the line is not in service”, speaks in bloody Japanese. 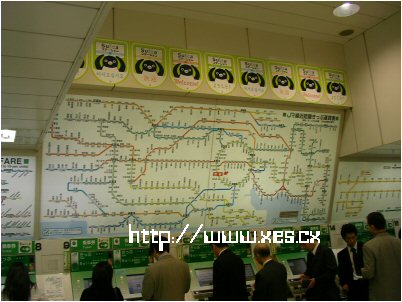 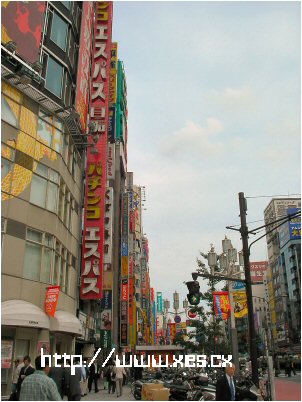 My first destination was Shinjuku. This place has everything, high class department stores, home less people, erotica related shops, restaurants and so on.

I walked aimlessly around Shinjuku armed with a lousy Lonely Planet guide. Shinjuku doesn’t have many interesting places to visit (I visited the interesting ones on my previous trip) but the unique neon signs are something worth to see.

There was some sort of film festival in Shinjuku. It was a small festival though. They had a row of Star wars troopers, Darth Vader and other Star Wars character lined up in front of a red carpet. Darth Vader was rather short though. Hek hek 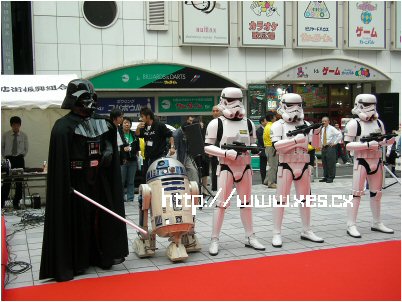 Then they brought a monkey walk the red carpet. I had no idea what the f00t they were trying to do. 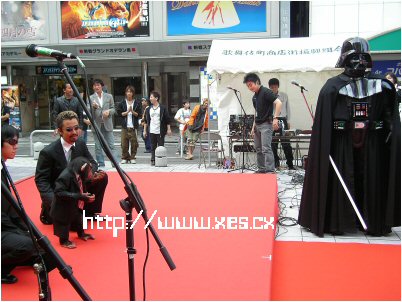 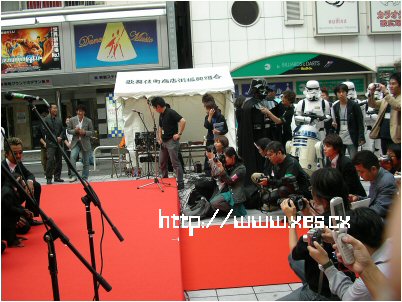 Darth Vader clearly pissed as attention is diverted to the monkey

I went on another round of aimless wandering. This time round, I saw a man standing on top of a bus with speakers around it. 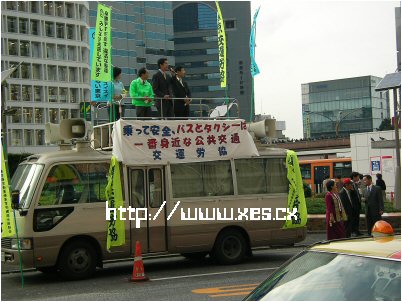 If I had this on video, you can see a guy waving his hands aimlessly.
In Japan, this is quite common during election time. That man standing on the bus is a politician. I guess he was trying giving a speech about his policies.

While walking under a bridge in Shinjuku, I saw boxes lined up along the pathway. It’s shaped like a coffin. It’s kinda amusing to see home less people popping their heads in and out from the boxes. Reminds me of the game which one has to hit moles with a cub when it pop out. 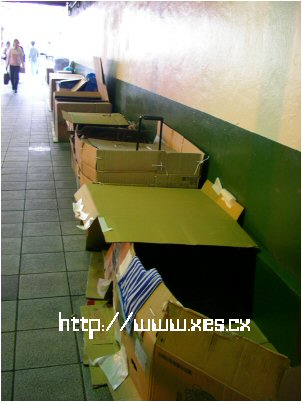 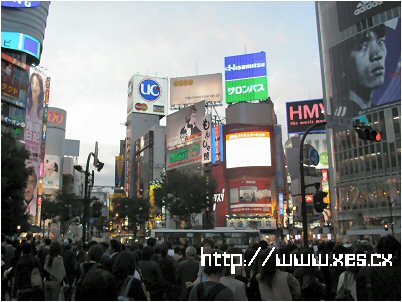 Shibuya is a youth oriented shopping district. I met up with Jane for dinner here.

Shibuya is the place one should go to check out Japanese fashion trend. Kogyaru (young girls who tan themselves and colours their hair blonde) are abundant here.

The best place to watch people is at the area of Hachiko Statue and Shibuya 109 as it’s an extremely popular meeting spot. 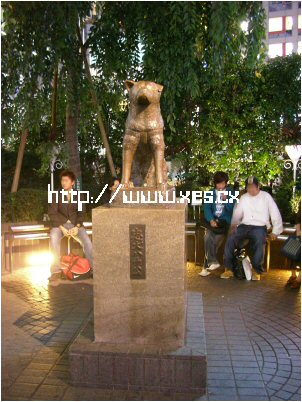 The food here is great and quite affordable as well. A nice bowl of noodles usually cost me less than 1000 yen (RM33~). But if I want to be stingy, I can head to the nearest supermarket at night and wait for them to slash the prices of their takeaway food. 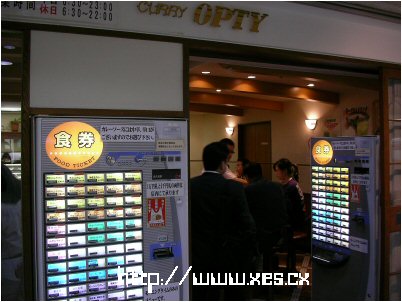 Buy a ticket to get your food.

This is xes signing off from Tokyo. Will update from Japan for the next 28 days!

I had my Honda sent for an oil change recently and the next morning i noticed that there were lights flashing on the dashboard right the moment i turned the key. Some say its normal, some say just ignore it but hell not to be a paranoid i swear the lights were not there before i changed the engine oil.So i tried looking for my car’s handbook only to realise that i thrashed it during last Christmas house cleaning.
Phear not, being a net geek that i am, i am 15024923% confident that i will find the manual somewhere on my file sharing software and almost without hesitation i fired up my most trustworthy p2p and almost instanly it returned 21312123 results when i keyed in “honda”. I took sometime to skim through the results and decided to download the 3 closest relevant i could find.
moments later…..
it finally finished downloading, and of course i double clicked.

Wow!GRAND THEFT AUTO!
nevermind i probably downloaded the wrong file, but then the rest of the files i downloaded were

The next time you lose your key, you know what to look for on kazaa.

Recently, we see a lot of cars with sticker of Buddha, Jesus and other Gods but havint 3 Gods on your car…isn’t it too much?

What is the first thing that comes to your mind when you see this headline?