If you agree, please state the reason why.

If you disagree, please rebut this assumption.

It will be held in

I’m giving them away cause I wont be free on Saturday. And also a gift to my fellow visitors courtesy of www.xes.cx! eke

Gimme a call or drop me a note ASAP! (No I’m not going to post my phone number here. I don’t want any ghey SMS or calls again) hehe

The condition of the road in Old Klang Road is really, really bad. Potholes everywhere, plastic barriers left unattended, cars blocking the way, bottleneck, you name it, Old Klang Road got it! If I have a gun, I’ll jump out from the car and start shooting those road fuckers.

Speaking about jumping out from the car and shooting people, recently a woman was shot dead by a man from a prominent family in Malaysia.

He was driving around KL after having couple of beers with his friends. Then suddenly, he got out from his car, took out his revolver and started shooting randomly. He stopped a taxi, pointed his gun at the driver and ordered him to get out.

The taxi driver complied and next thing was he was on his knees. However, he escaped as the man turned around to stop other cars.

He stopped a Perdana., pointed his revolver at the driver and ordered her to get out. The lady refused. He then shot the poor lady on the chest. She died on the spot.

After that, the man went on stopping cars and shooting randomly. As soon as he ran out of ammo, the members of the public cornered him and assaulted him.

And guess what? He was sentenced to 8 years in jail for manslaughter. Well, he pleaded the defence of hypoglycaemia (commonly known as low blood sugar, oh wait, was it hyperglycaemia (too much sugar), I cant remember which defence he pleaded).

By the way, to those coming back from Australia, can you please get this lotion called lanolin for my mother? My mum wants this particular brand only (look below).

Can you get as much as you could (reasonable-la 1 ton is too excessive)? I’ll pay u back! I promise!

Work sucks today. Couple of my colleagues weren’t around so the firm was pretty quiet.
I spent the entire day studying for my exam tomorrow. Well so called examination, it’s just an open book exam. However, the amount of shit I had to read was so much till I had permanent brain damage.

Well, after my CLP, I’m thinking of doing litigation work for a year or two. This is an area most newbie lawyers try to avoid but for the sake of experience, I dont mind getting fucked by the judge, senior lawyers, policeman, court clerks, other lawyers, cleaning lady etc…

Yesterday, my tenant’s friend had a row with one of my bastard neighbours. Apparently, this neighbour of mine damaged his car when he parked his car opposite of my neighbour’s front gate. So my tenant’s friend went up to that neighbour to clear the matter up, I mean, just to enquire what happened. However, this bastard neighbour of mine ended up shouting and screaming at him and scolded him for parking in front of her house. I don’t know what happened in the end, I wasn’t at home!

Well, we used to be in good terms with this bastard neighbour of mine (Let’s call her BN short form for bastard neighbour). I used to go to her house to learn piano and English. That was many years ago, when I was in primary school.

One day, BN was blasting her music loudly. So one of my tenants went up to her to complain cause my tenant was trying to study. Same scenario happened, my tenant got scolded but the aftermath was worst. BN and her family came up to my house and made noise. At first they were shouting and screaming outside my house, but we ignored them anyway.

But one night, while I was having tuition, they came with weapons. They smashed my dad’s windscreen and our glass door. We locked ourselves in the house but Dad was so pissed off that he went out and punched BN. I don’t really know what happened after Dad punched BN. Maybe Dad kungfu-ed BN and her family and they ran away, or probably BN and her family overpowered Dad and kicked my dad’s ass. I don’t know but after that incident, we lodged a police report and they were arrested. 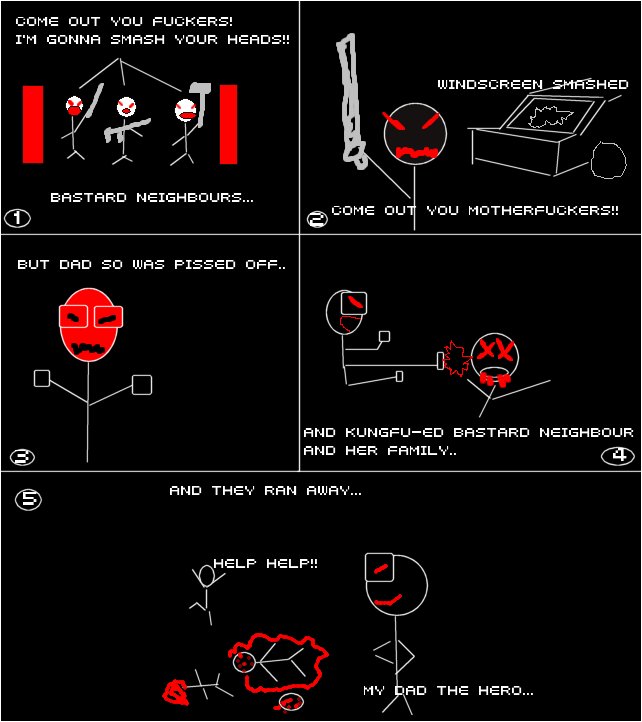 My other neighbours were also not in good terms with BN. So bad till BN decided to barricade themselves by building huge walls surrounding their house and a video camera outside to monitor the front gate.

Corrupt1on in Malaysia
A friend of mine was cruising down a highway at 90KM/H. Unknown to him, the speed limit was 80KM/H and unfortunately for him, there was a roadblock.

He wound down his window as the Malay police spoke to him,

Obviously, the police was impliedly saying that he wants a br1be. Friend thinks for a while and said,

Friend was happy that he managed to reduce the bribe to more than 50% so he reached out for his wallet.

He gave RM10 to the police.

Friend: Sorry la bang…wallet ada RM10 saja. (Sorry sir, I got only rm10 in my wallet)

After accepting the money, he immediately walks away. There was another car behind approaching behind my friend’s car. I guess another victim for Mr. Policeman.

Atmosphere.
The gang felt like clubbing today so we headed to Atmosphere. It was pretty good but the music was pretty sucky as usual. Oh well, that’s the only decent place we can hang out nowadays.

One of our friends had an overdose. That fellow was tripping so badly till his eyeballs rolled up. We had to smack him and pour cold water on him.

Thank you Lisar for bringing me into Atmosphere! ;D

I left early. I got class tomorrow and I had to fetch Sui Lin (sorry-ar I made your break your curfew! hehe), Lisar and Irene home. 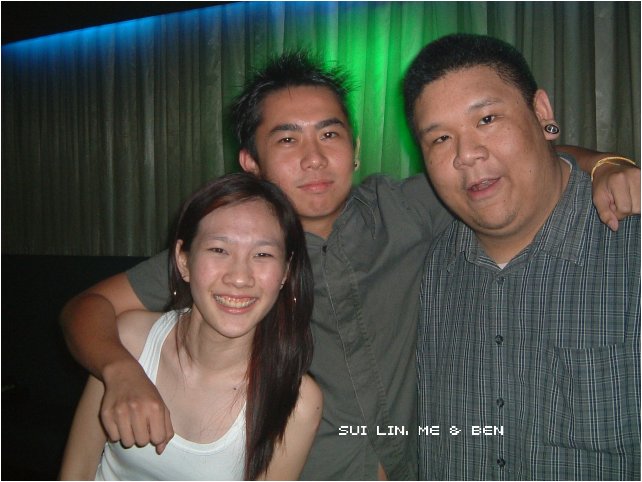 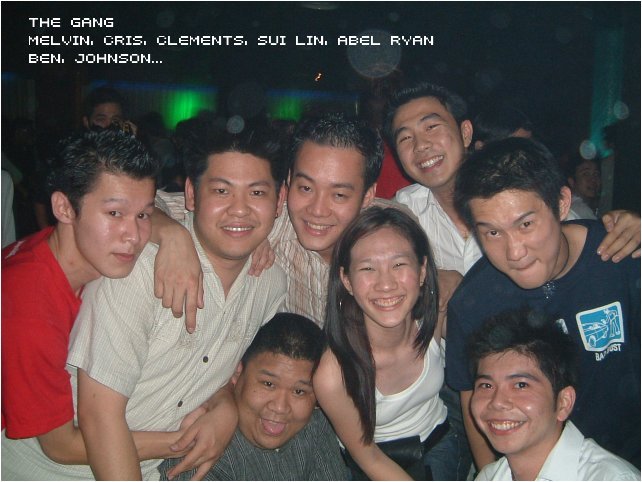 I went for my weekly kickboxing classes with Ryan today. This time was better, more girls, oh wait, ladies, they were pretty old actually. Damn. So anyway, Ryan was skilfully punching and kicking every move that our Instructor ordered.

He did all the moves. PERFECTLY
Then it was my turn…

/me punch…then forget the remaining moves, stood there like an idiot while the others were punching. Instructor shouts at me. I was totally confused. Too many moves. I cant remember jackshit…

But overall, the class was good. Will be going again next week.

We were pretty tired by the end of the evening, so while walking with around Sg. Wang, I jokingly said,

Ben said, “Look at my face, do you see whiskers on my face??”

“Do you see a tail on coming out from my backside?”

Man, it was damn funny…

Then I had some Purple Pum (it was really how it was spelt, I swear) Bubbletea which had no bubble pearl things from some mad-laughing-woman shop in Sungai W4ng.

Then I had some noodle thing in that Gary shop in Sungai W4ng.

Then later at night, I fucking LS.

It must have been the fucking bubbletea. Fuck the mad-laughing-woman.

Fucking hell, it was like getting period TWICE a month.

I had wan tan mee for lunch with Wei Chen, Wen Dee and Aunty Jetski at Jalan Batai.

Then I had sweet and sour pork, fried vegetables and kaya bun for dinner with parents.

Then later at night, I had diarrhoea.

Fucking hell, I felt as If I?m having my period. But thank god, this period can be solved with a trip to the toilet. 😀

/me eats my charcoal pills.

At 4PM, it was raining the whole day. I was at work but Mum was at home. She couldn’t go out because her car’s road tax expired. Suddenly,

The loud bang came from outside. Mum rushed out from the house and saw something devastating.

Well, part of the house.

My neighbour’s house is designed funnily. It was built on a hill slope supported by pillars. Couple of months ago, my neighbour bought the house and renovated it. They extended the kitchen till the edge of the hill. However, unknown to them, the rainy season has weaken the foundation of the house.

And today, the entire back portion of the house collapsed. It hit 3 houses below, a lawyer’s house (my neighbour is so going to die, the lawyer will sue his ass), a doctor’s house and a kindergarten. Fortunately, there were no casualties or injuries.

Cleaning up would be a tedious task due to the fact that the area is not easily reachable. Furthermore, it would be dangerous because the remaining portion of the house might collapse. *prays for the safety of my neighbours.